Fr. Pasquale Foresi was considered by Chiara Lubich one of the co-founders of the Focolare Movement and yet, he is not only little known in the panorama of the Church of the 20th century but also among the focolarini themselves. The publisher Città Nuova now comes out with the first part of his biography entitled: “In fuga per la verità” (In Pursuit of the Truth). We discover, talking with the author, Michele Zanzucchi, the charisma of this person who, going through the events of two centuries, seems to have lived not one but three different lives.

Our setting is in the library named after him, that of the Sophia University Institute, here in Loppiano. The “Pasquale Foresi” library is bright, silent and welcoming, in this still summer morning of September. It is the right place to remember such an intense and eventful story, such as that of Fr. Pasquale Foresi, co-founder and first co-director, with Chiara Lubich, of the Focolare Movement. Michele Zanzucchi, author of the book, spent several years trying to reconstruct the events that characterized it, and in the end “In fuga per la verità” (In Pursuit of the Truth) was born, the first of three books published by Città Nuova that will makeup the biography of Don Pasquale Foresi. 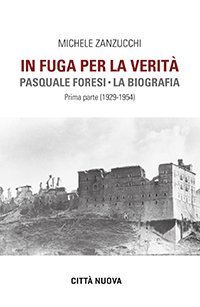 In this first book, you recount the years from his birth, in 1929, to his priestly ordination in 1954. Perhaps they are the most unknown, those of formation… It is precisely with reference to this period that he himself said to a group of religious in 1971: “I cannot tell you the first part of my story because I would scandalize you”. What have you managed to reconstruct of the life of this very young Foresi?
“Of this very young Foresi I have reconstructed a rough outline of his story, thanks to a series of letters and documents left by his sister Piera, which have allowed me, like Thumbelina’s crumbs in the fable, to go back up a bit and find his path, which is extremely complex and may seem a bit surprising! In short, when he was 14 years old, on the day of the Armistice, he ran away from home to serve his country. He wanted to leave with the army but the Italian army was no longer there, it was in transit. So, he was enlisted by the “black brigades”, and fought with them against the partisans for two, three months in Tuscany above all. Then, he was transferred to the Cassino front, to fight alongside the Nazis. In the meantime, however, Foresi had begun a personal path of, I would say, conversion not only religious but first of all philosophical, of thought. He had understood that that life, apart from the material difficulty of life in war – he was 14 years old – but that that life did not make up the fullness of a man’s existence.
And then, one night, he escaped, freeing a number of prisoners, Italian deserters who, the next day, would have been killed. He helped them escape and he himself escaped together with a comrade-in-arms, Ezio Giovannelli. They were picked up by a shepherdess in Vico in the Lazio region, and for three months he stayed there. He met several partisans and he lived hidden from the Germans who were also in Vico. He fled again, surviving many other adventures until he came back home from the war after the Liberation. A few weeks later after his arrival at home, he went to the seminary. And then he left…but that’s a different story”.

Let’s not reveal the whole story… Chiara Lubich considered him one of the co-founders of the Focolare Movement with Igino Giordani, and yet, of the three figures, he is certainly the least known, even by the focolarini themselves. Can you tell us why?
“That he is the least known is also natural because, after a period of long and extremely intense activity next to Chiara (from 1950 until 1967-68), due to an illness, he had to withdraw from public life. He remained always next to her but not with that activity and initiative he had before. Giordani has a whole tradition, a whole Center that keeps his memory alive. Foresi is the last of the three to die, he died in 2015, and only now is he beginning to be known.

And it is important that he be known, for the value of the person in himself. He was little known even within the Movement, especially in the first phase of his life. I would even say that Lubich herself was not aware of what Foresi had done before he met the Focolare Movement, or probably a very small part… This was part of Chiara’s attitude, who was not interested in people’s past but was more interested in the present and their conversion”.

In the preface of this book, you write about the relationship he had with Chiara Lubich: “Pasquale was able to stand before the founder, and not behind her (like the focolarine), or at her side (like Giordani): Foresi was able to help Lubich give birth to a complex and articulated work, if one can say so, holding back the founding impetus, not with a censorious spirit but so that lasting works could be born”. What did you mean by that?
“Foresi was one of the very few people, I think the only one within the Focolare Movement who really knew how to say “no” to Chiara. It is not that he said it to say “no” to her, he did it because he was, let’s say, the one who the Lord had thought of putting beside Chiara to incarnate and realize her mystical intuitions. So, Fr. Foresi’s task was also to say “no” to Chiara, because she would probably have done extraordinary things, but they would not have had a practical realization, they would have died. Therefore, Foresi had an obscure function but a very important one”.

Fr. Foresi was also the person who strongly contributed to the realization of works that still express the spirituality of the Focolare: the publishing house Città Nuova, the Mariapolis Center of Castelgandolfo… and Loppiano. You who have known and interviewed him many times… how did you understand that the land he came to see in order to sell it could become the first experiment of a permanent “mariapolis”?
“Foresi had an extraordinary intelligence, synthetic, not analytical. His books do not account for everything he knew because somehow he did not have the patience or time to write books on philosophical analysis. In particular, however, he had a knowledge out of the ordinary, for the thought of the time, and was able to make operational syntheses. This is his great ability. Chiara chose him because he helped her embody the light she received.
This was a plot of land inherited by Vincenzo Folonari, around the villa that had been Giovanni Papini’s, the Tenuta Loppiano. Before selling it Foresi said “but let’s go and see it”. He came up here with, it seems to me, Giorgio Marchetti, my father Danilo and another person. They saw this land and there, the idea of making it a permanent center was born. Then, he talked about it with Chiara and, as the discussions came and went, it was decided to make it the center for the focolarini school. Thus the whole Loppiano project started. I remember a long conversation I had with him in 1985 for the first book on Loppiano. This is after he had fallen ill in 1967.
For hours, he had told me of his desperation for somehow betraying God’s plan. He had… and this was part of his spiritual trial, he had the impression of having betrayed what was Chiara Lubich’s charism. In reality, Chiara said a thousand times that there had been no betrayal; on the contrary, she herself had put her stamp on Loppiano, which then became the model for many other little cities of the Focolare in the world”.

In short, “In fuga per la verita’” (In Pursuit of theTruth) is a book that we recommend, because it is as compelling as a novel. In addition to the story of the protagonist, it has the ability to make you savor the atmosphere and fascinating complexity of an era, that of the first half of 1900.