“We are a group of students enrolled in various curricula at the Sophia University Institute, and we come from 12 African countries. The culture of unity has opened up a new horizon for us, which is finally within our reach: today, we believe that the youth can dream and actively work for a new Africa, characterised by peace and development. It is up to us to imagine the Africa we want to live in tomorrow, and, therefore, it is up to us to prepare in order to take on the resulting social, political and economic responsibilities…”.

This was their statement five years ago. That dream, born in the Sophia classroom, started to take concrete shape at the Seminar held at the Mariapolis Piero (Pasolini), Kenya, in the first week of January, when, with the invaluable support of the MPPU, an action plan for Africa was drafted. The proposal made by the first group of students and young graduates was welcomed with enthusiasm by thirty university professors, educational policy and project experts and leaders of social networks operating in Kenya, Uganda, Burundi, Tanzania and the Democratic Republic of the Congo. All through the seminar, which was characterised by dialogue and active planning, they shared their experience and offered their support and opinions.

A three-year interdisciplinary study programme preparing students for leadership and civic and cultural engagement, boldly named “Together for a New Africa”, is currently under study. The course will be designed for around a hundred students from various East African countries who will then, in turn, involve more young people through workshops, seminars and active citizenship initiatives. The seminar held at the Mariapolis Piero was the first step in this process, and it focused primarily on training the tutors and nominating faculty members. 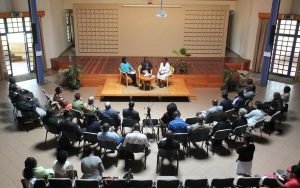 The study programme will be centred around the complex issues facing the regional context of the East African Community and the Great Lakes region, and it will offer a broad range of skills, tools and languages to reinforce the students’ abilities to interpret and intervene in political processes, from the local to the global scale and vice-versa, from the perspective of the culture of unity. The Ecoforleaders programme, a similar initiative that will pave the way for the new course, was launched a few months back by a group of MPPU tutors and politicians in the DRC capital Kinshasa, and 150 students have already enrolled.

The most crucial characteristic of this project is that it is managed by the youth themselves, starting from the coordinator in Nairobi: they are the ones who decide on the steps to take, meet with representatives of local and international institutions, search for funding, and draft the contents of the program. What idea of leadership do they have in mind? “Real leaders must be ready to sacrifice all for their people”, said Mandela. Following in the footsteps of the great African leaders, these youths aim to be leaders who choose to give their best and to say no to passive resignation and retaliations, to personal gain and corruption, and, instead, choose to say yes to the truth, to creativity, to expertise and shared responsibility.

The tutors and the professors, for their part, have generously committed themselves to being credible examples of a leadership of communion. At the root of this journey is the experience that those 12 African students, and many more after them, lived at Sophia. A study experience that is the reflection of a way of life rooted in the search for unity, and where unity is the key of a new thought paradigm through which to interpret cultures and, far from making fruitless attempts at ‘exporting’ ideas, let each culture suggest new solutions to the most pressing problems facing humanity.

It is difficult to say whether this experience will result in the opening of a Sophia Campus in Africa in the space of a few years. It is clear, however, that this is by no means a form of cultural colonialism; instead, this experience is about opening a new space for the people and cultures of Africa and beyond to meet, to the point where each can “love the other’s country as their own”, as Chiara Lubich once said. Not merely in view of the future (in 2050, Africa will account for a quarter of the world’s population), but so that Africa can express the extraordinary richness it is called upon to share with the world, and which the world clearly needs.