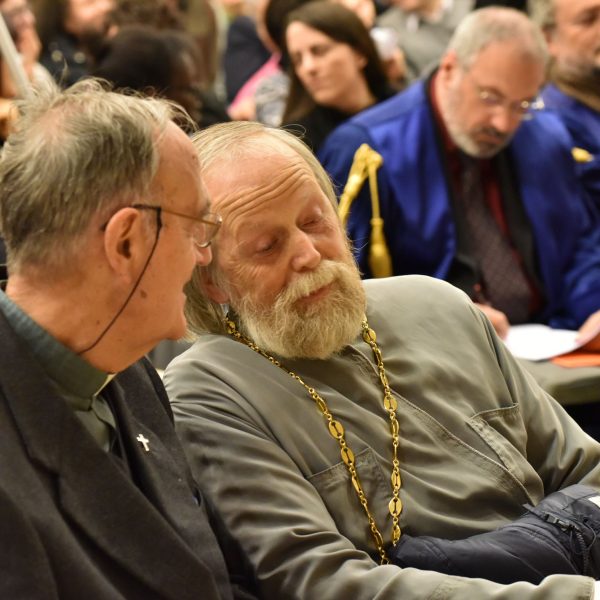 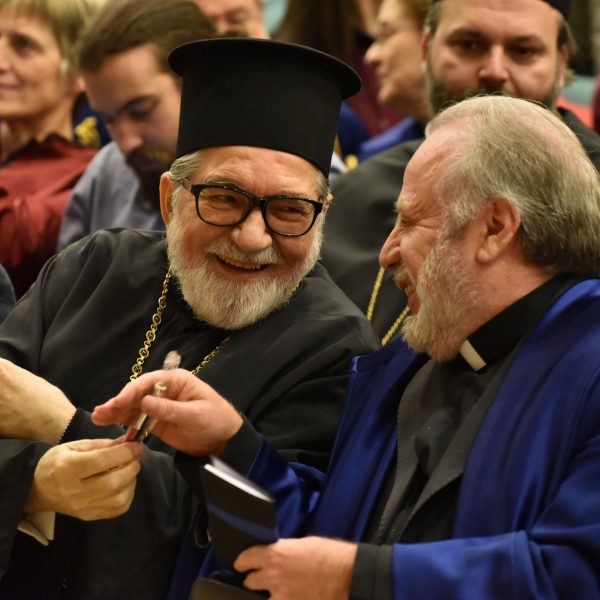 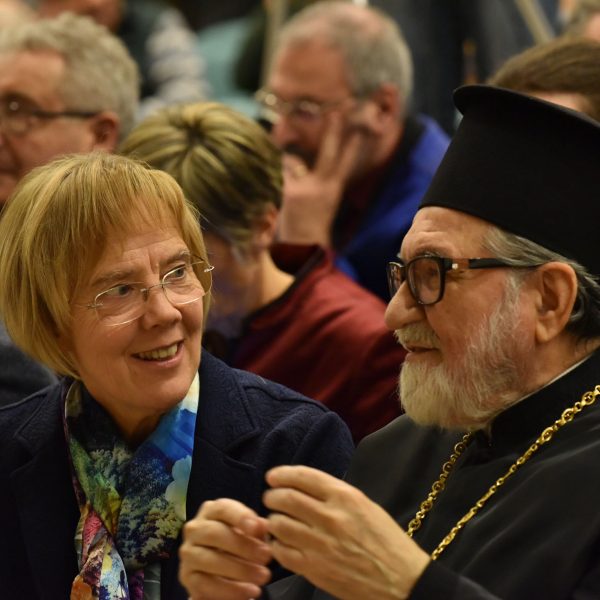 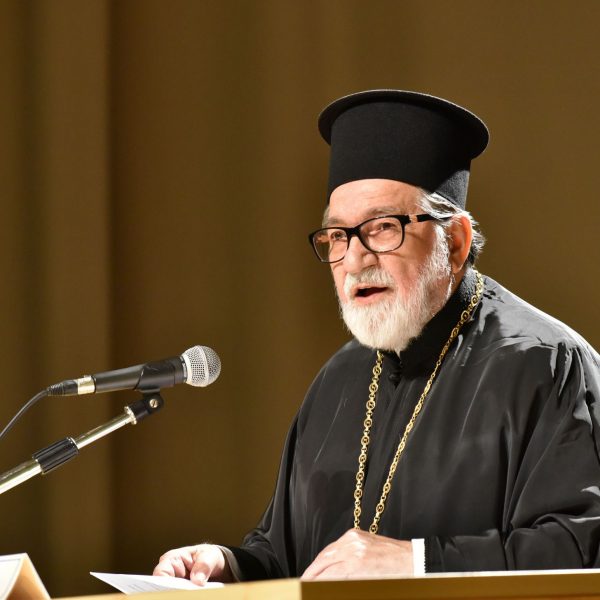 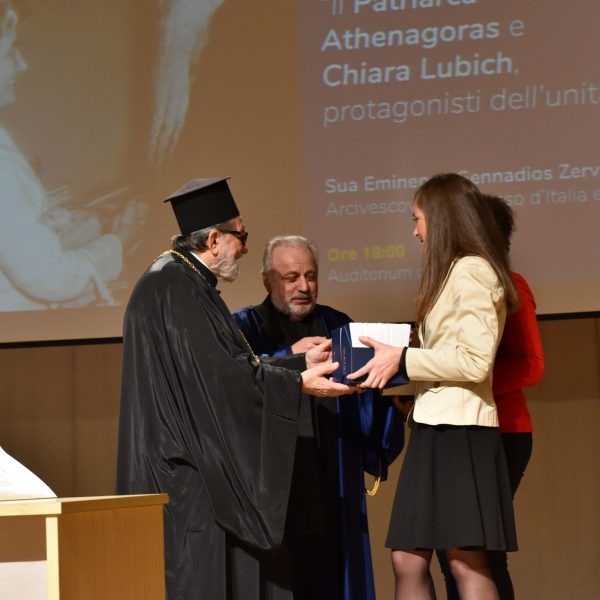 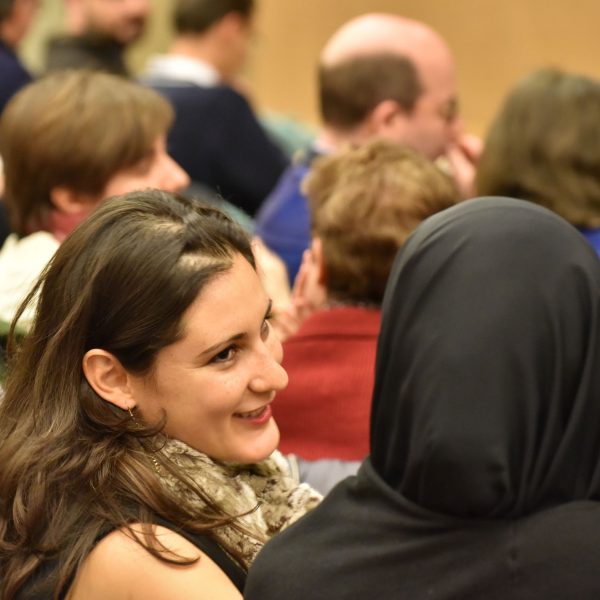 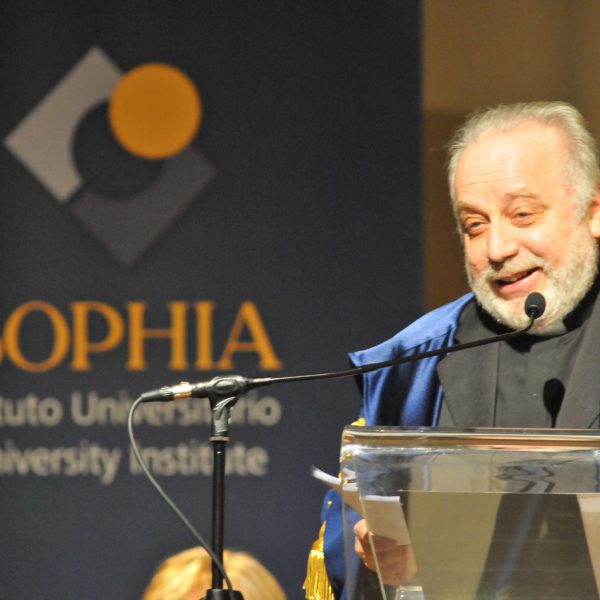 Today, 14th December 2017, saw the inauguration of the Patriarch Athenagoras – Chiara Lubich International Ecumenical Chair, an expression of the unity between Sophia and the Ecumenical Patriarchate of Constantinople led by Bartholomew I. Archimandrites, presbyters, Focolare members and friends from several Christian confessions, including Lutherans, Romanian Orthodox, Syriacs, Russians and Greek Catholics, gathered in Loppiano for the occasion.

Before the solemn opening, which took place in the evening, a session for the entire academic community was held in the Loppiano Auditorium in the morning. President Piero Coda welcomed the key speaker of the day, H. Em. Gennadios Zervós, Metropolitan of the Orthodox Archdiocese of Italy and Malta, and retraced the motivations and the steps that led to the event. He then offered a portrait of the two people who honour this new academic endeavour with their names. Gaining deeper knowledge of the “two lungs of the Church” – a metaphor coined a century ago by Vjačeslav I and later used by John Paul II on many occasions – is of vital importance in order to have a sense of the history of Christianity and of its theological, spiritual and cultural heritage.

Fraternising with the Oriental lung, furthermore, is “essential to the mission” of Sophia, which is to promote a culture of unity in the academic world – emphasised the President.

Over the last decades, in fact, there has been a considerable “shift in the relationship” between the Orthodox and the Roman Catholic worlds. While the first millennium saw a certain degree of communion, despite some natural difficulties, the schism of 1054 created painful wounds, which grew deeper because of cultural and linguistic misunderstandings. Four hundred years later, in 1439, a Council was held in Florence to try and mend the rupture. What we are living today has its roots in the Second Vatican Council, whose objective was to reach unity again, and which made it possible for the historic embraces between Paul VI and Patriarch Athenagoras to take place. The first one occurred in Jerusalem in January 1964, and was followed by the remission of reciprocal excommunications the following year and by the creation of the Catholic-Orthodox International Mixed Commission, of which Piero Coda himself has been a member since 2005.

In 1967 Chiara Lubich travelled to Constantinople for the first time, following an invitation to meet Patriarch Athenagoras. On many an occasion, Chiara affirmed that she had never met a greater soul than that of the leader of the Orthodox Church, and Athenagoras, for his part, declared himself to be a simple disciple of her charism for unity between the Churches. That is why the joint Chair  is named in honour of these two protagonists. The idea of the joint Chair first occurred to Gennadios Zervós when the first Sophia honorary PhD was conferred on the current Ecumenical Patriarch Bartholomew I in October 2015.

In his lecture before the academic community, the Metropolitan took inspiration from the word ‘spirituality’ – a word which may sound “strange and paradoxical” in the present day. It is not a  “magic word”, – he observed – but rather a “word of life” that is inextricably linked to the evangelical message of love and unity. In our time, Patriarch Athenagoras and Chiara Lubich shine as “models of spirituality for the whole of humanity”, because they have offered “their whole being for the encounter with the other, who is the icon of God”. Spirituality, in his words, is a “greater reality that can lead man to the authentic discovery of God, to help him find himself again”. After recalling the Fathers of the undivided Church and relating some personal anecdotes, Gennadios Zervós clarified that the aim of the joint Chair is to “bring apostles of love and unity to the world”. At a time of great divisions, which are tearing the soul and humanity apart, the Chair will present new models to follow and develop valuable lessons from the encouraging steps that have been taken in the direction of a more complete understanding of man and his vocation to unity.

“You truly breathe through two lungs” – commented Piero Coda – “because you have offered us a charismatic interpretation of ecumenism”. For his part, the Metropolitan affirmed that he had felt total freedom to express himself because of the genuine welcome he had received from the Sophia academic community.