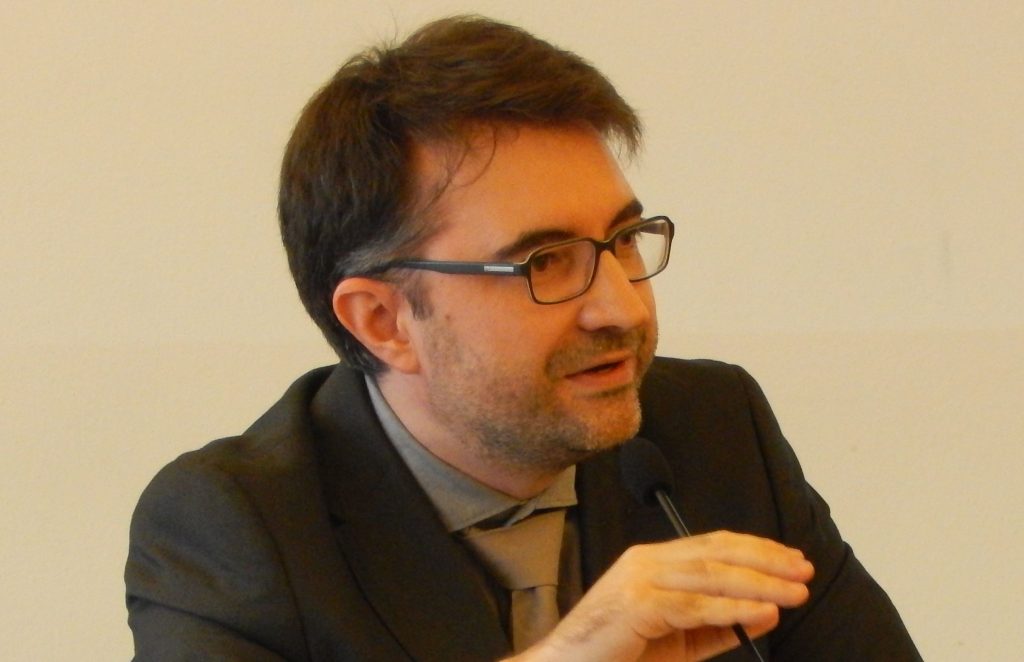 Paolo Frizzi is a Lecturer at Sophia University Institute where he has been a faculty member since 2014 and a Post-Doc fellow since 2017. He is Academic Coordinator of the Center of Research and Training “Sophia Global Studies” and of the Program “Religions in the Global World”, and he lectures on “Religions and Global Processes” and “Interreligious Dialogue”.
Paolo completed his Laurea Magistrale in History at University of Padua and his Ph.D in Culture of Unity at Sophia University Institute. His research interests lie in the area of pluralism and global transformations, ranging from interreligious and intercultural dialogue, the global role of religions and the global dynamics and developments shaping globalization and post-globalized processes. His actual research is focused on the connection between religious universalisms and social and cultural pluralism. He is collaborating actively with researchers from several other disciplinary and cultural backgrounds and regularly involved in international academic programs and conferences in Europe and Asia. His first book, “Religioni e Disordine Mondiale. Le sfide dell’età post-globale”, has been published in 2017. Recently he has been appointed by Cardinal Tauran of the Pontifical Council of Interreligious Dialogue as a member of the Catholic delegation for the Catholic-Iranian Colloquia on evaluation of modernity.
Coordinated Projects and Programs
• Academic Workshop, “Perspectives on Global Transformations”, October 2017
• Summer School, “Interreligious Dialogue in Theory and Practice”, co-organized with the Islamic Center of England (London, UK) and the Institute for Religious Studies (Qum, Iran), August 2017
• Academic Workshop, “Wings of Unity”, co-organized with the Islamic Center of England (London, UK) and the Institute for Religious Studies (Qum, Iran), since July 2016
• Training for Trainers, “Sophia Asia”, Manila, August 2016
• International Conference, “Making Democracy One’s Own”: Muslim, Catholic and Secular Perspectives in Dialogue on Democracy, Development & Peace, co-organized with Notre Dame University, John Cabot University, Unversity of Sussex and Reset – Dialogue on Civilations, Rome, June 2016;
• Summer School, “Religions in the Global World”, August 2015
• Academic Workshop, “Religions in the Global World”, April 2015
• Winter School, “Be Part of the Change. Building & Sharing a Culture of Innovation”, February 2015

Selected Lectures
• European Academy of Religion, Bologna, March 2018. Lecture on: “Religions and tran-disciplinary collaboration. Framework, opportunities and challenges”.
• Peace through religions? Global ethics and the peace potential of religions, European Parliament, Strasbourg, May 2017. Lecture on: The Culture of Dialogue as a Path Towards the Global Ethos”.
• University of Glasgow, Glasgow, February 2017. Lecture on: “Why a Culture of Unity is Needed: Methodology, Challenges and Opportunity”.
• Catholic-Iranian Colloquium on evaluation of modernity: Extremism and violence in the name of religion. Which approach to religion?, Rome, November 2016. Lecture on: “Humanity and its common home. Contribution of Religion”.
• Islamic Institute of London, London, November 2016. Lecture on: From Spirituality to Culture. The methodology of the Culture of Unity
• Socio-economic, political, legal and socio-cultural processes in Ukraine and in the World, Borys Grinchenko Kyiv University, Kiev (Ucraine), June 2016. Lecture on: “Challenging the Global Role of Religions”.
• Transnational Religious Movements, Dialogue and Economic Development, Università degli Studi di Torino, Turin, December 2015. Lecture on: “From Religion to Business: The Case of the Innovation Consultancy “Consulus”.
• Philosophy, religion and culture in a globalized world, University of Zhytomyr, Zhytomyr (Ucraine), November 2015. Lecture on: Engaging Religions through Interreligious Dialogue and Cooperation.
• “International Conference on Religion and Public Piety: Comparing European and Indonesian Experiences, Indonesian Consortium for Religious Studies, Yogyakarta (Indonesia), October 2015. Lecture on: Christian Spirituality and Interreligious Dialogue.